These two sets appear as new annual products from the US Mint. Both contain proof quality coins presented with an illustrated outer sleeve and folder.

Both also feature no mintage limits or household order limits.

Additional details of each set is offered below: 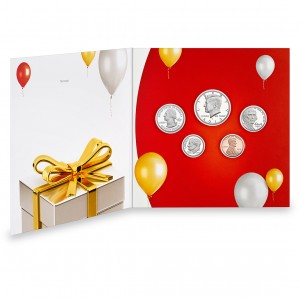 The 2013 United States Mint Happy Birthday Coin Set contains five 2013-dated coins in proof quality. The coins are encapsulated and affixed to the folder with the obverse and reverse of each coin visible in the folder.

Found in the set are:

All five coins are struck to proof quality at the US Mint's facility in San Francisco. A certificate of authenticity appears on the back of the folder. 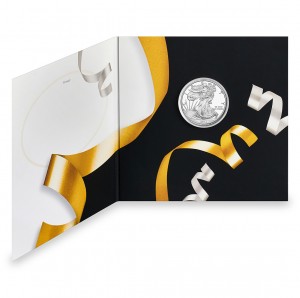 Only one coin appears in the 2013 United States Mint Congratulations Set. It is the 2013 American Eagle  Silver Proof Coin struck at the US Mint's facility in West Point.

The 2013 Proof Silver Eagle is encapsulate and attached to the presentation folder with both the obverse and reverse visible. The folder includes images of silver and gold ribbons along with space to write a personalized message.

A certificate of authenticity is printed on the back.

Those interested in ordering one of the 2013 United States Mint Happy Birthday Coin Sets or 2013 United States Mint Congratulations Sets may do so directly from the US Mint, when released. Orders are accepted on the Mint's website of www.usmint.gov or by calling 1-800-USA-MINT (872-6468). A shipping and handling charge of $4.95 per order applies.