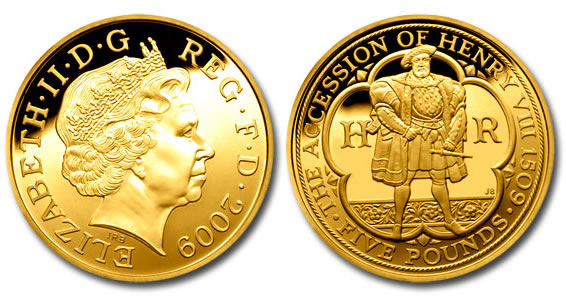 The design on the proof gold and brilliant uncirculated copper-nickel coins shows Henry VIII standing before a frieze of roses in the "antique" style favored in the carvings and tapestries of the period. On the edge is a Latin inscription, Rosa Sine Spina (Rose Without a Thorn), which was also used on Henry VIII's own coinage. Additional details include the initials HR (Henry Rex) which represents his personal monogram and a rope border surrounding the coin's design which symbolizes the Royal Navy.

"Love him or hate him, Henry VIII is undoubtedly one of history's most influential monarchs," said Dave Knight, Director of Commemorative Coins at the Royal Mint. "His reign changed the face of England forever and we felt it was essential that this remarkable period of history was commemorated with a lasting and treasured momento."

Only 1,509 of the gold proof coins have been produced, 1509 being the year that Henry came to the throne, at the issue price of $2,000. An affordable copper-nickel brilliant uncirculated version is available in a colorful folder for only $19.95.

In addition, The Royal Mint has struck just 200 impressive silver proof coins containing one kilo (over 32 troy oz.) of pure silver for Alderney--the most northerly of the Channel Islands and a British dependency. Designed by Mark Jamieson, the reverse features a handsome portrait of Henry VIII. Each kilo coin comes in a luxurious presentation case, featuring an individually numbered plaque and booklet incorporating a Certificate of Authenticity, and is priced at $2000.

The Henry VIII commemorative coins can be ordered by calling official distributor Panda America at 800-472-6327 or on their web site at www.PandaAmerica.com.