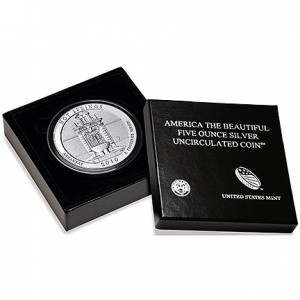 On Thursday morning, the United States Mint indicated that the complete mintage of 27,000 of the 2010 Hot Springs Five Ounce Silver Uncirculated Coins had been ordered by its customers. Those still interested in the strikes may add themselves to a waiting list which the Mint has instituted for the coins.

Both these uncirculated coins as well as the bullion strikes are struck from five ounces of .999 fine silver and feature a diameter of three inches. The reverse of the strikes honor sites of national interest with this specific coin honoring Hot Springs National Park found in the state of Arkansas.

This sell-out was not much of a surprise to most coin enthusiasts, although the length of time it took to reach the status did intrigue many. The Hot Springs Silver Coins set the Mint's ordering systems on fire when they launched on April 28th. So much so that the online ordering system crashed under the intense pressure caused by repeated attempts by buyers to place their orders on the website. In just nine hours on that day, the Mint recorded that over 70% of the mintage had already been sold (or over 19,000 of the 27,000 struck).

It took almost two more weeks for the Mint to reach the full mintage finally indicating the 27,000 had been sold yesterday morning. To insure a complete sell-out, the Mint started a waiting list for the coins.

Here is the text of the notice placed on the Hot Springs Silver Uncirculated Coin Page on the Mint's website:

Waiting List Notice: The number of orders we have taken meets the maximum limit for the 2010 America the Beautiful Five Ounce Silver Uncirculated Coin™ - Hot Springs National Park Coin. You may still place an order for this product, which will go on a waiting list. If a product becomes available due to an order cancellation, we will fulfill orders from the waiting list on a first-in, first-served basis. We cannot provide information about your position on the waiting list.

Collectors will not have to wait long for the next coin in the series to be issued by the Mint. The 2010 Yellowstone Silver Uncirculated Coins will go on sale May 17, 2011 beginning at Noon (Eastern).

Additional information on this series of coins can be found on the World Mint Coins sister site of America the Beautiful Silver Coins.