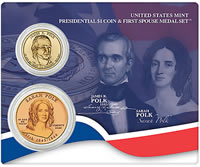 Housed on a colorful illustrated card, both pieces help tell a story of the history of the United States.

James K. Polk was President from 1845-1849 and pledged to only serve the one term, which he did. During this short time period, however, Polk managed to oversee the second largest expansion the United States would ever experience. Through his military and diplomatic efforts he helped acquire the Oregon Territory (including the present day states of Washington, Oregon, and Idaho, and parts of the states of Montana and Wyoming), as well as the southwestern part of the present continental United States (including the present day states of California, Nevada, Utah, most of Arizona, and parts of New Mexico, Colorado and Wyoming).

Sarah Polk did her duty for the country by not only fulfilling the social obligations required of a First Lady, but she also served as her husband's private secretary (the only First Lady to ever serve in that capacity).

The Coin and Medal Set honoring the Polks will be available for only $8.95 plus the Mint's standard shipping and handling of $4.95 per order. Those interested may go after 12 Noon Eastern on the 17th to the Mint's website at http://www.usmint.gov/, or by calling the US Mint directly at 1-800-USA-MINT (872-6468).

Besides being great collectibles, these sets have known to increase in value nicely on the secondary market after they are no longer available from the Mint, so please keep that in mind. In fact, look below for some samples of what the market is like for the sets.