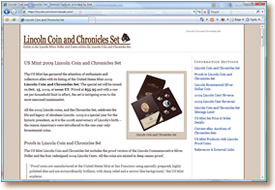 As the name describes, the site is devoted to the new Lincoln Coin and Chronicles Set due to be released from the United States Mint on Thursday, October 15, 2009 at Noon (Eastern Time). The coin world has been abuzz with excitement over this release not only because of the pieces it contains, but also the extremely limited mintage.

"We are happy to offer LincolnCoinChroniclesSet.com to the public," said Mike Unser, founder and president of CoinNews Media Group LLC. "Those taking the time to visit the site will find it flushed with detailed information on the Lincoln Set and updates on how the collecting community is reacting to its availability."

"Perhaps no other figure in the history of the United States has had such a profound influence upon it as has Abraham Lincoln. His leadership during the American Civil War tore at him personally, and in the end cost him his own life. The Lincoln Coin and Chronicles Set is a fitting homage to a humble man thrust to greatness."

LincolnCoinChroniclesSet.com has details on the five proof coins that are contained in the collection including the Lincoln Commemorative Silver Dollar and the four bicentennial 2009 Lincoln Cents, each of which features a new reverse based on a specific aspect of Lincoln's life. The US Mint includes other unique items in the set which is all explained on the new site.

Information on availability and secondary market sources will also be available, making the site a valuable reference tool for months to come.

CoinNews Media Group owns and operates several coin news and related sites where more than 170,000 collectors spend time at each month. These sites include, but are not limited to: CoinNews.net, SilverCoinsToday.com, CoinCollectingNews.org WorldMintCoins.com, FirstSpouseCoins.us, and 2009LincolnPennies.com.