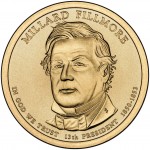 The Presidential Coin series was launched in 2007 and offer four new coins a year featuring the former Presidents in the order upon which they served as the Chief Executive of the United States.  As this is the fourth year of the program, the Presidents honored will be the 13th through the 16th which were Millard Fillmore, Franklin Pierce, James Buchanan and Abraham Lincoln.

Fillmore was an accidental President. He was not elected to the office, but was serving as Vice President when Zachary Taylor passed away, thrusting Fillmore into the Presidency.

The coins honoring him will be released to the Federal Reserve Banks beginning tomorrow for distribution into the circulation channels.

The Mint is charging $35.95 for each roll, plus the standard $4.95 shipping per order.  Orders will be accepted starting at Noon (Eastern Time).

For more information on the coin itself, please see our Millard Fillmore Coin page.