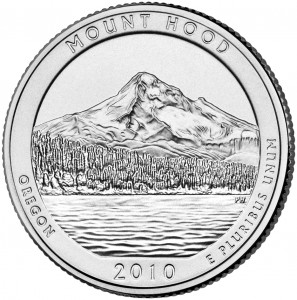 A date for the official launch of the last America the Beautiful Quarter to appear in 2010 has been announced by the US Mint.

The release ceremony for the 2010 Mount Hood National Forest Quarter will be held on November 17, 2010 at the World Forestry Center, located at 4033 SW Canyon Road in Portland, Oregon.  A start time of 10:30 AM (Mountain) is planned.

The America the Beautiful Quarters® Program will see a total of fifty-six strikes when com in 2021 with a release rate of five per year until then.  Each strike will be emblematic of a different site of national interest from around the country with one strike representing each state, the District of Columbia and the five territories of the United States.

Mount Hood Quarters will actually enter into circulation two days before the ceremony on November 15, 2010.  On that same day, the Mint will also start selling the coins to the public.  Circulation quality strikes of the Mount Hood Quarters will be sold in bags of 100 coins for $35.95, with the buyer having the choice of strikes from the US Mint's facility in Denver or the US Mint's facility in Philadelphia.  Two-Roll Sets containing one roll of 40 quarters from Philadelphia and one roll of 40 quarters from Denver will also be available for $32.95.

Those who are lucky enough to attend the ceremony will also be offered the chance to exchange cash for rolls of the new strike.  Children 18 and under who attend will get one Mount Hood Quarter free just for being there.

The Mint is also planning a coin forum the night before on Tuesday, November 16, from 5:30 to 6:30 p.m. PT at Cheatham Hall, World Forestry Center.  United States Mint Deputy Director Andy Brunhart will host the forum where the nation's future coinage will be discussed.