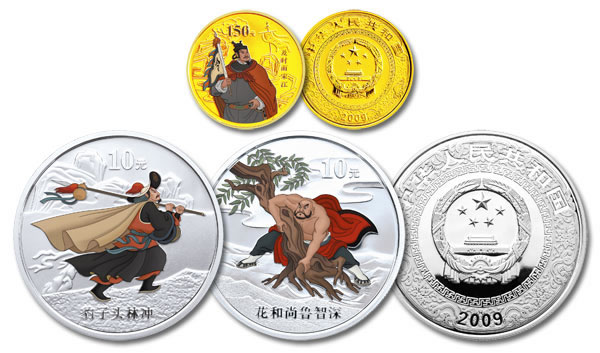 A new series of coins from China picture some of the memorable characters featured in the 100 chapters of one of the great classical novels of Chinese literature, "Outlaws of the Marsh."

The Chinese saga "Outlaws of the Marsh" is must reading for Chinese high school students, and was even carried by Chairman Mao during the Long March (retreat of the Red Army from the Nationalists in 1934) as a constant reminder of the proud traditions of the Chinese people. It tells the stories of 108 outlaws who became heroes during the Song Dynasty in the years leading up to the establishment of the Southern Song regime in 1127.

Set in mountain fortresses, tea houses, inns, private houses, courtrooms and on journeys by road and water, their tales involve stratagems, seductions, betrayals, warnings, and a wealth of other incidents. After defeating the imperial armies, the outlaws are eventually granted amnesty by the emperor, who then recruits the outlaws to form an imperial military contingent. The heroes eliminate foreign invaders of the Liao Dynasty and quell the uprisings by rebel forces around the nation.

"Outlaws of the Marsh" has been transformed into a classic Chinese opera. And, among numerous translations, Pearl S. Buck did one of the earliest English versions entitled All Men are Brothers in 1933. A film adaptation20of the novel was produced in 1972, and a 1980s TV serial were both produced in Hong Kong. In the early 1990s, a Manga (Japanese comics) appeared, and a half-hour animated series Hero:108 can soon be viewed on the Cartoon Network.

The first silver coins in the three-year series feature full color representations of Lin Chong and Lu Zhishen uprooting a willow tree. Each proof quality 10 Yuan coin is 1 troy oz. of .999 fine silver; there is a limit of 30,000 2-coin sets. According to the novel, Lin Chong was six feet four inches tall, with fierce eyes and a head like a panther, earning him the nickname "Panther Head."

In his early life he served the Imperial Court as the martial arts instructor of the 800,000 strong Imperial Guards. Lu Zhishen, nicknamed the "Flowery Monk," is the lead in the first major story cycle of the novel, in which he comes to epitomize loyalty, strength, justice and brashness.

The only way to obtain the proof 1/3 oz. .999 fine gold 150 Yuan coin, featuring Song Jiang, is in one of 30,000 3-coin sets (together with the two silver coins). The real Song Jiang and his bandits were active in early 1121. The official biography of Zhang Shuye, the Prefect of Haizhou, states:

"The scouts say that the bandits have made thei r way to the coast and seized control of ten huge vessels. Zhang recruited 1000 men and planted an ambush in a nearby city. Next, he sent skirmishers to lure the bandits into battle. The best foot soldiers were stationed by the coast.

When the armies clashed, the bandits' ships were then burnt. When the bandits heard that, they lost their will to fight. The army lying in ambush then attacked and captured many of the bandits. Then Song Jiang surrendered."

The historical Song Jiang's eventual fate is unknown after his surrender to the Imperial Court. The fictional Song Jiang is described in "Outlaws of the Marsh" as having eyes like those of a phoenix, a big squarish mouth and dark complexion. Standing at six feet, he was relatively short compared to the other heroes.

Zhang Shun could swim for up to 25 kilometres and stay submerged for seven20days and seven nights—earning him the nickname "White Streak in the Waves." The colored coin pictures Huang Wenbing, a low-ranking official from Jiangzhou, who is scheming by nature and desires to make his name through unscrupulous means, being captured by Zhang Shun in an under-water battle. The attack by the outlaw/heroes in Huangnigang, pictured on the 50 Yuan silver coin, enabled them to capture the royal birthday gifts.

"Outlaws of the Marsh" legal tender coins are available from official distributor Panda America, the company that helped introduce China's popular gold Pandas in 1982. For prices and availability call 800-4-PANDAS or visit www.pandaamerica.com.