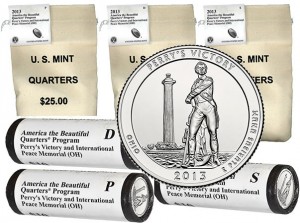 Today, April 1, 2013, the United States Mint officially releases the circulation quality 2013 Perry’s Victory and International Peace Memorial Quarter for sale to the public. The Perry's Victory Quarters are available in bags and rolls and go on sale beginning at Noon (Eastern).

This release marks the second of 2013 from the US Mint as part of its America the Beautiful Quarters® Program (the first was the White Mountain Quarters issued in January). It also marks the seventeenth in the series overall which debuted in 2010.

Featured on the reverse of the new quarters is a design emblematic of Perry's Victory and International Peace Memorial located in the state of Ohio. The US Mint describes the design with: 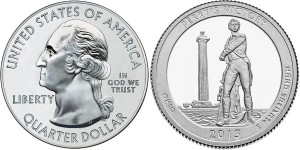 "The reverse design depicts the statue of Master Commandant Oliver Hazard Perry with the Peace Memorial located in the distance.  The memorial is one of the tallest of its kind in the U.S.  Inscriptions are PERRY'S VICTORY, OHIO, 2013, and E PLURIBUS UNUM.  The reverse was designed and executed by United States Mint Sculptor-Engraver Don Everhart."

All strikes of the America the Beautiful Quarters Program include the John Flanagan portrait of George Washington on the obverse. The portrait has been featured (with minor variations) on the obverse of circulating quarters since 1932.

The America the Beautiful Quarters Program debuted in 2010 and showcases five new strikes annually. Each honors a different site of national interest on its reverse with one site chosen from each state, the District of Columbia and the five US territories. The program is scheduled to conclude in 2021 when a total of fifty-six new quarters have been issued in the series.

The newest release of Perry's Victory Quarters is available in several different options from the US Mint including:

Each of the above options may be ordered from the United States Mint via its online store located at http://catalog.usmint.gov. Orders are also accepted via telephone by the US Mint at 1-800-USA-MINT (872-6468). The Mint's standard shipping and handling charge is $4.95 per order.