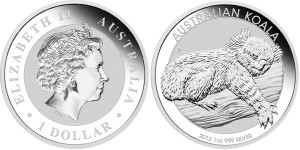 The Perth Mint of Australia has announced that the 2012 Australian Koala Silver Bullion Coins will be available for sale beginning on November 1, 2011.  A total of four different sizes of the Australian Koala Coin will be issued with each struck from 99.9% pure silver.

Shown on the reverse of the silver bullion coins will be a design featuring Australia's famous marsupial, the koala. The design is new for 2012 in keeping with the Perth's tradition of changing the koala image annually in the series.

The 2012 design depicts  a sleeping koala with its arms draped around the branch of a tree. Perth Mint artist Aleysha Howarth created the image which will also include the inscriptions of "AUSTRALIAN KOALA," "2012," "999 SILVER" and the size of the strike.

Last year's 2011 Koala Coins showed and adult koala sitting comfortably in the fork of a tree as its young climbed one of the branches. Previous annual issues in the series also featured different reverse designs leading back to when the first Koala Silver Bullion Coin was issued in 2007.

The fact that the Perth changes those reverse designs annually is one of the major reasons collectors seek the new releases each year. The coin's are also sought by investors who feel comfortable adding the coins to their portfolio knowing that each is guaranteed for weight and purity by the government of Australia.

A total of four different sized 2012 Australian Koala Silver Bullion Coins will be struck by the Perth. Sizes include 1 kilo, 10 ounce, 1 ounce and 1/2 ounce each struck for the .999 fine silver.

The Perth has indicated that no mintage limit will be applied to any of the 2012 Koala Coins. Strikes will be produced to meet demand until the annual issue is closed in late 2012 when final mintage numbers will be released.

Each coin will ship in a protective acrylic capsule.

Additional information on other bullion coins may be found on the World Bullion Coins page.