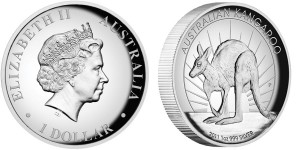 The Perth Mint of Australia has recently released the 2011 Australian Kangaroo 1oz Silver Proof High Relief Coin which is sure to be a big hit among collectors worldwide. Its release marks a great addition to an already varied portfolio of  2011 Australian Coins.

This High Relief Kangaroo Coin marks its second year with this strike after having debuted in 2010. It borrows the annually changing kangaroo design typically featured on the Gold Kangaroo Bullion Coins but offers those designs in a different composition and in an extremely unique format.

Never before had the Perth struck the kangaroo designs on a 99.9% pure silver coin before last year. The Perth continued the innovative concept by also striking it in high relief. The combination of those two factors helped last year's high relief Kangaroo to completely sell out - a fact that may likely be repeated in this year's release.

According to the Perth, the maximum mintage in place on the 2011 High Relief Silver Kangaroo Coin will  only be 20,000. That is the same number minted last year when the previous sell-out occurred.

Each of these coins are considered legal tender of the country of Australia and features a face value of AUS $1. That legal tender status is further identified by the inclusion of a portrait of Queen Elizabeth II of England on the obverse of the coin.

The reverse contains the Perth Mint's 2011 kangaroo design struck in high relief. It shows one of the Australian marsupials in front of a background of sun-rays. The 2011 design was originally completed by Aleysha Howarth.

Each coin contains one ounce of 99.9% pure silver. The strike has a diameter of only 32.60 mm which is smaller than typical Perth Mint one ounce silver coins because it is struck to double the thickness of a standard coin to allow for the high relief reverse.

More information on the coin may be found on the 2011 Australian Kangaroo Silver High Relief Coin page.