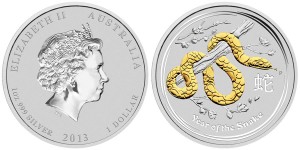 Recently released by the Perth Mint of Australia is the 2013 Year of the Snake Gilded Silver Coin. Each of these new releases is struck from one ounce of .999 fine silver to specimen quality.

Shown on the reverse of the strike is the 2013 Year of the Snake design created by the Perth Mint for use on its annual Australian Lunar Series II silver coins. In the instance of this release, the image of the snake is gilded in 24-karat gold.

The Australian Lunar Series II debuted from the Perth in 2008. It features reverse designs showcasing the twelve creatures found in the Chinese zodiac.

The snake is the sixth of the twelve creatures to be featured in the series. Last year's release showcased a dragon such as on the 2012 Year of the Dragon Gilded Silver Coin.

The reverse of the snake shows the reptile hanging from the branch of a tree. Inscriptions on the reverse include "Year of the Snake" and the Chinese character for snake.

Each new gilded snake coin features a diameter of 45.60 mm, a thickness of 2.60 mm and a minimum gross weight of 31.135 grams. Potential buyers may order the coin with a presentation case or in a capsule. The capsule option is designed for display in the 12-coin collection case offered by the Perth to display all twelve of the gilded coins either already issued or to be issued as part of the Lunar Series II.

For additional information on the release, see the Perth Mint's Year of the Snake Gilded Silver Coin page offered via the affiliate link below: