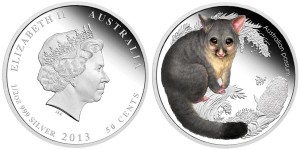 The Perth Mint of Australia offers the second release of the Australian Bush Babies II program with the debut of the 2013 Bush Babies Possum 1/2 oz Silver Proof Coin. Shown on the reverse of the coin is a colored design depicting a baby possum.

Each of these coins is struck to proof quality from 1/2 ounce of 99.9% pure silver. Maximum mintage for the release is listed by the Perth Mint as just 10,000.

The Australian Bush Babies II series follows the original program which realized a complete sell-out from the Perth. Reverse designs of both series feature the images of baby creatures found on the Australian continent.

The original program contained reverse designs of a kangaroo, dingo, sugar glider, bilby and koala. The second installment in the series will also feature a total of five coins with the first debuting earlier this year as the Kookaburra 1/2 oz Silver Proof Coin. Subsequent strikes in the program include coins featuring a platypus, an echidna and a wombat.

These coins are struck as legal tender of Australia under the Australian Currency Act of 1965. Face value of the coins is 50 cents which is indicated on the obverse with an inscription. That inscription joins "ELIZABETH II, " AUSTRALIA," "1/2 oz 999 SILVER" and "2013" on the obverse along with the Ian Rank-Broadley effigy of Queen Elizabeth II.

Specifications for the coin include a diameter of 36.60 mm and a thickness of 2.30 mm. Each features a minimum gross weight of 15.591 grams.

Current pricing of the Possum Silver Proof Coin is listed on the Perth Mint's website as AUS $61.36. This pricing is subject to change based on silver market conditions.

The 2013 Bush Babies Possum 1/2 oz Silver Proof Coin may be purchased directly from the Perth Mint using the affiliate link below. Additional information on the release is also available by following the link.