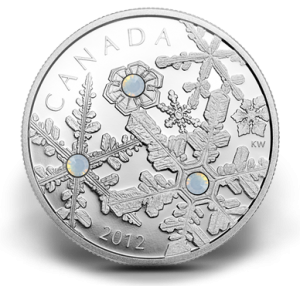 The Royal Canadian Mint expands on its seasonal selection for collectors with the release of the new 2012 Holiday Snowstorm Silver Coin. This strike features a reverse design emblematic of a wintry storm including representations of snow-flakes accented with Swarovski® opal white crystal elements.

Maximum mintage for the Holiday Snowstorm Coin is listed by the Royal Canadian Mint at just 10,000. Each is struck from 99.99% pure silver and is offered by the Mint for CAD $114.95.

The design of the snowstorm on the reverse of the coin is the work of Konrad Wachelko. It depicts several snow-flakes with the three largest of those flakes featuring a Swarovski® opal white crystal element in its center. Accordingly, it can be said that no two of these coins are alike since the Swarovski® elements are each unique.

The obverse of the coin contains Susanna Blunt's effigy of Queen Elizabeth II. Obverse inscriptions include 20 DOLLARS and ELIZABETH II.

These coins feature a maximum gross weight of 31.39 grams with a diameter of 38 mm. The edge of each proof quality coin is serrated.

The Royal Canadian Mint ships each encapsulated proof coin with a maroon display case. A numbered certificate of authenticity is also included.

Those looking for another display option for the Holiday Snowstorm Silver Coin may want to consider purchasing the bezel with gold string option to turn the coin into an ornament. It is currently also being sold by the Mint for an extra $29.95.

All of these are currently available for ordering directly from the Royal Canadian Mint's online store at http://www.mint.ca/store/.