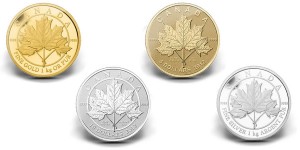 What image could be more emblematic of Canada than the maple leaf? With that in mind, it is not surprising that the Royal Canadian Mint has opted to continue a series that debuted last year featuring designs of the leaf on their reverse.

The newest coins to appear in that series, the 2012 Maple Leaf Forever Coins, are struck from varying sizes of gold and silver. These strikes have been recently released by the Mint and are purchasable now from the Mint.

All four currently available 2012 Maple Leaf Forever Coins contain the same reverse design of a trilogy of maple leafs. This design is the work of Luc Normandin and centers around one large maple leaf with one smaller leaf to the left and one to the right.

As legal tender coins of Canada, the obverse of each features an effigy of Queen Elizabeth II. The portrait is the original work of artist Susanna Blunt.

The chart below offers specifications and pricing for the new coins.

Also varying just as drastically as the pricing are the mintages for coins of the series. Just 30 of the gold kilo coins will be issued with up to 100,000 of the 1/2 ounce silver coins.