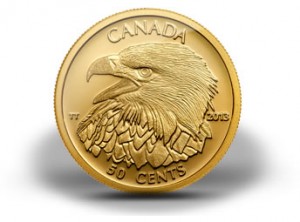 While inventories last, the Royal Canadian Mint is currently offering the 2013 Bald Eagle 1/25 oz Gold Coin. The coin is struck from 1/25 ounce of 99.99% pure gold and features a reverse design depicting a bald eagle.

The coin is offered by the Royal Canadian Mint as the 12th issue in a series of 1/25 oz pure gold coins. Maximum mintage of the release is limited to just 10,000.

"The great Bald Eagle is an amazing predator whose image has become synonymous with the notions of freedom, majesty, strength and individualism in North America—particularly for its well-known symbolic status in the United States of America," indicates a description on the coin's Royal Canadian Mint product page. "Eagles, in general, are renowned as much for their hunting skills, speed, and strength as for their striking looks and size. A large brown-feathered raptor with white-feathered head and tail, razor-sharp talons and sharp hooked beak, the Bald Eagle’s vision is four times sharper than in humans, and is key to its hunting prowess."

To depict the bald eagle, Canadian artist Trevor Tenant opted to offer a profile of the majestic bird on the reverse of the coin. As viewed from the eagle's left side, its beak is seen open with intricate detail used for head and upper body.

The reverse also includes the inscriptions of CANADA, 2013 and the legal tender face value of 50 CENTS. Off to the left, the artist's initials of TT are shown.

As previously mentioned, maximum mintage of the Bald Eagle Gold Coin is limited to only 10,000. Each comes encapsulated and presented in a maroon clamshell case. A serialized certificate is also included.

Specifications of the coin include a composition of 99.99% pure gold. The coin is struck to proof quality and features a diameter of 13.92 mm, a serrated edge and a weight of 1.27 grams.