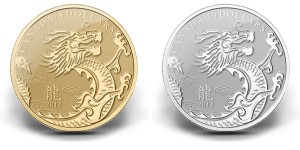 Use of the Chinese Zodiac dates back millennia and features twelve creatures each representing a different year of a twelve year cycle that repeats. Of those creatures, the dragon is believed to be the mightiest and occupies the fifth position of the Zodiac.

Those born in the Year of the Dragon are believed to be extremely ambitious and dominant. With a constant drive to succeed, these individuals are always willing to take the risks required to achieve their goals.

Many minting facilities around the world are offering their own strikes to celebrate the Year of the Dragon which runs from January 23,  2012 – February 9, 2013. Among those is the recently released  Year of the Dragon Gold Three Coin Set released by the Perth Mint of Australia.

Like those Perth releases, these new Royal Canadian Mint coins are sure to excite collectors.

Stretching along the outer edge of the design, a four-clawed dragon is shown on the reverse of each Year of the Dragon 1/10 Oz Gold Coin as designed by Three Degrees Creative Group Inc. A Chinese character and clouds added to the design drepresents good fortune.

Each of these strikes are composed of 1/10 ounce 99.99% pure gold. Shown on the obverse of the coin is a portrait of Queen Elizabeth II of England as completed by Susanna Blunt.

The Royal Canadian Mint encapsulates each coin and presents it in a maroon clam-shell case along with a numbered certificate of authenticity. That certificate indicates the maximum mintage of the gold coins which is 38,888.

The Year of the Dragon 1/10 Oz Gold Coins are available now for ordering directly from the Royal Canadian Mint for $229.95 CAD.

The Year of the Dragon 1/2 Oz Silver Coin contains the same obverse and reverse imagery as the associated gold coin. This includes the obverse portrait of Queen Elizabeth II by Susanna Blunt and the image of the dragon on the reverse by Three Degrees Creative Group Inc.

Each silver dragon coin is composed of 1/2 ounce of 99.99% pure silver. The Royal Canadian Mint encapsulates each strike, and, along with the numbered certificate in a red cardboard pocket, it is presented in a red envelope with the coin design and Chinese wishes printed on it in gold and red foil.

Orders for both coins may be made by visiting the Royal Canadian Mint's online store.