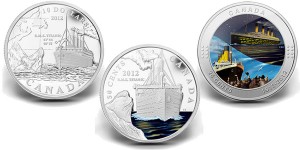 The Royal Canadian Mint has issued three new coins acknowledging the sinking of the RMS Titanic one hundred years ago. The Titanic Commemorative Coins released by the Mint include a $10 99.99% pure silver coin, a 50-Cent Silver-Plated Colored Coin and a 25-Cent Colored Coin.

All three strikes mark the 100th anniversary of the sinking of the cruise ship that at the time was said to be unsinkable. It set sail on its maiden voyage on April 10, 1912. After four days, the Titanic hit an iceberg in the frigid waters of the North Atlantic south of Newfoundland. Slowly taking on water, the ship sunk after two and a half hours.

Unfortunately, the RMS Titanic only carried enough lifeboats for less than half of the people on-board. As a result, 1,517 souls were lost to the tragic incident.

To acknowledge the event and the strong link still felt by many to the sinking today, the Royal Canadian Mint has issued the three new commemorative coins.

“The Royal Canadian Mint is proud to commemorate Canada's history, culture and values with special collector coins,” said Ian E. Bennett, President and CEO of the Royal Canadian Mint. “Canada is forever linked with the story of the RMS Titanic through the efforts of Canadian ships that took part in recovery operations and by the memory of the lives lost that rest peacefully in Halifax cemeteries.”

The $10 .9999 fine Titanic Silver Coin features a reverse design by Yves Bérubé. It shows the Titanic cruising the waters of the Atlantic with an iceberg in the foreground. It is available now from the Royal Canadian Mint for CAD $64.95.

Shown on the reverse of the 50-Cent Silver-Plated Titanic Coin is a design also by Yves Bérubé. The colorized design offers a more head-on image of the ship afloat in blue-hued waters. Once again, an iceberg is depicted. This coin is available now for CAD $34.95.

Finally, the 25-Cent Colored Titanic Coin offers a reverse design by Three Degrees Creative Group. It depicts a split scene involving the Titanic. To the top is a night image of the ship cruising the Atlantic. On the bottom is a scene reminiscent of the joyous launching of the ship. Interested individuals may order this coin directly from the Mint for CAD $25.95.

“The tragic fate of the Titanic has long captivated the world's imagination,” said the Honourable Stephen Greene, Senator, on behalf of Minister Jim Flaherty, Minister of Finance and Minister responsible for the Royal Canadian Mint. “These beautifully crafted coins pay tribute to the many sacrifices that were made and hard lessons that were gained by humanity during the RMS Titanic's voyage one hundred years ago”.