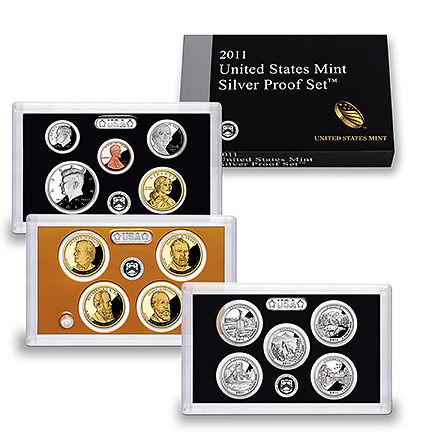 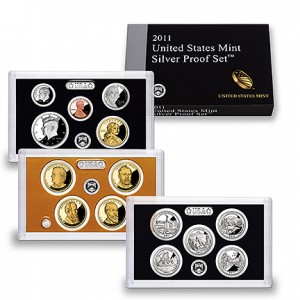 Continuing increases in the silver market has forced the US Mint to stop selling two additional products that contain the precious metal - the 2011 Silver Proof Set and the 2011 America the Beautiful Quarters Silver Proof Set.

On Monday, the Mint stopped selling the two annual collector sets and placed a short note on the product's pages in the Mint's online store stating "This product is temporarily unavailable." The move was precipitated by the fact that the silver market topped $43 an ounce earlier in the week putting it at levels not seen in 31 years.

The two sets join last year's 2010 Silver Proof Set and 2010 America the Beautiful Quarters Silver Proof Set which were pulled from available inventory earlier this month by the Mint when silver rose to over $40 an ounce. With the addition of the two newest sets, the Mint has now halted sales on a total of four different annual silver products.

It is believed that these sets will be returned to availability in the future after the Mint has had time to adjust the prices on them. Before being removed, the Mint was selling the products at the following prices:

The Mint will likely return these products to availability after reviewing new price points for them and publishing those new prices in the Federal Register. At least this is the procedure followed by the Mint last month when it raised the prices on three of these sets after silver jumped above $36 an ounce.

When available again, the set's new sale prices will likely offer a cushion again between the selling price of the sets and the intrinsic melt value of them. That cushion disappeared as the precious metal made those historic gains.

The Silver Proof Sets add a Roosevelt Dime and a Kennedy Half Dollar which are struck from 90% silver to the silver quarters which gives these sets a total of 1.34 ounces of the precious metal. Calculating the 1.34 ounces times $43 an ounce gives each of these an intrinsic value of $57.62.

Those melt values left the Mint no room to cover its minting and other production costs for the sets when they were selling at their old prices - a situation which should be corrected when the sets are offered again.