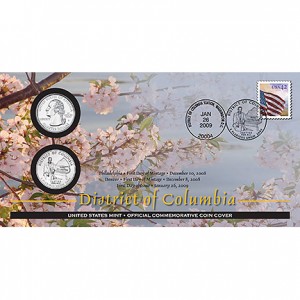 Collectors interested in the 2009 District of Columbia Official First Day Coin Cover have less than two days to make their purchases directly from the US Mint.

At 5:00 PM Eastern Time on June 30, 2010, the US Mint will pull the covers from availability forever. After that point, collectors interested in obtaining the cover will have to look to the secondary markets to buy them.

Currently, the asking price for the covers from the Mint is only $14.95 (plus the Mint's standard shipping and handling charge of $4.95 per order). However, a quick look at the online auction site eBay already shows a few enterprising individuals selling the covers for an average of $10 over their initial sale price.

The D.C. Covers have an extremely limited mintage of only 25,000 and were first released back on April 24, 2009. They were joined later in 2009 and early in 2010 by First Day Coin Covers of the Puerto Rico, Guam, American Samoa, U.S. Virgin Islands, and the Northern Mariana Islands Quarters.

END_OF_DOCUMENT_TOKEN_TO_BE_REPLACED

The United States Mint released the Northern Mariana Islands Official First Day Coin Cover for sale on January 12th of this year. This cover set is the sixth and final to be issued under the 2009 District of Columbia and U.S. Territories Quarters Program.

Included in the cover set are two of the Northern Mariana Islands Quarter-Dollars, one struck at the US Mint's facility in Philadelphia and one from its facility in Denver. Limited to a production of only 20,000, the coins of the set are mounted on a display card that includes a cancelled 44-cent Flag stamp. The cancellation on the stamp (November 30, 2009, SAIPAN, CNMI) signifies the day the Northern Mariana Islands coins were first released into circulation by the Federal Reserve Bank.

END_OF_DOCUMENT_TOKEN_TO_BE_REPLACED

Sales of the Northern Mariana Islands Quarters will begin on Monday, November 30, 2009 at Noon (Eastern), from the US Mint. These coins mark the sixth and final release for the 2009 District of Columbia and U.S. Territories Quarters Program.

Preceding the Mariana Islands issues were coins honoring the District of Columbia, the Commonwealth of Puerto Rico, Guam, American Samoa and the U.S. Virgin Islands. All of these were issued in 2009 and immediately followed the 50 State Quarter series that ran from 1999-2008. END_OF_DOCUMENT_TOKEN_TO_BE_REPLACED

The U.S. Virgin Islands Quarter is now available to the public from the US Mint and through the normal distribution channels. It was officially launched during a ceremony in Charlotte Amalie, St. Thomas, late last week but has been in circulation since September.

END_OF_DOCUMENT_TOKEN_TO_BE_REPLACED

As we talked about last month, the 2009 United States Mint Uncirculated Coin Set® went on sale today for the listed price of $27.95, plus $4.95 for shipping and handling.

The demand for the set is already guaranteed to be high, as prior annual offerings have proven to be a success for the US Mint. As an example, 745,464 of the 2008 Mint Sets were sold.

This year's mint set stands out with all the one-year-only designs and sheer volume of coins -- more than any year prior at 36, with 18 struck in Denver and 18 in Philadelphia.

The 2009 Lincoln Cents are receiving the most attention. Their themes honor the four major aspects of Abraham Lincoln's life: END_OF_DOCUMENT_TOKEN_TO_BE_REPLACED

The US Virgin Islands Quarter depicts a Tyre Palm Tree, Bananaquit bird, and Yellow Elder flowers in the foreground. Saint Croix, Saint John and Saint Thomas, the three islands of the territory, are featured on the background.

Also shown prominently is the inscription "United in Pride and Hope", which is the USVI motto, and U.S. VIRGIN ISLANDS. The quarter-dollar was sculpted by Joseph Menna.

To coincide with the new commemorative release into circulation, the US Mint is offering 100-coin and 1000-coin bags for respective prices of $32.95 and $309.95. The bags are available with coins struck from the US Mint facilities in Philadelphia with the "P" mint mark or coins from Denver with the "D" mint mark. The two-roll sets include 40 VI quarters from each facility for $32.95. END_OF_DOCUMENT_TOKEN_TO_BE_REPLACED

October 1, 2009 is scheduled as the release date for the much anticipated 2009 United States Mint Uncirculated Coin Set from the US Mint. This set will contain a whopping 36 coins, 18 of those from the Mint in Denver and 18 from the Mint in Philadelphia.

The complete set will sell for $27.95 plus shipping and handling, which is $5 more than last years uncirculated set sold for. Of course, this year 8 more coins will be included, which accounts for the price difference.

Each coin struck on specially burnished blanks will feature a satin-like finish which first was introduced in the mint sets in 2005.