The United States Mint has four new products scheduled to debut this week. Included in these new issues are the 2014 America the Beautiful Quarters Uncirculated Coin Set™, the proof and uncirculated 2014 Florence Harding First Spouse Gold Coins and the 2014 Herbert Hoover $1 Coin Cover.

Additional information on these releases is offered below: END_OF_DOCUMENT_TOKEN_TO_BE_REPLACED 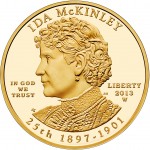 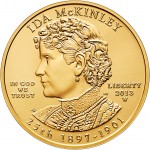 Available beginning today, November 14, 2013, the United States Mint will make available for purchase the 2013 Ida McKinley First Spouse Gold Coins. Each of these coins features an obverse portrait of Ida McKinley, wife of the 25th US President William McKinley, and a reverse design emblematic of her life.

These coins are issued as the first 2013-dated release of the US Mint's First Spouse Gold Coin Program. The series debuted in 2007 and honors the spouses of the former Presidents of the United States in the order in which they served in office. END_OF_DOCUMENT_TOKEN_TO_BE_REPLACED 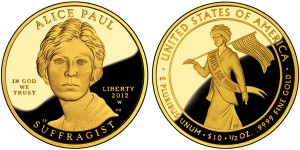 Pricing of the strike is listed at $1054.00 for the proof quality version and $1041.00 for the uncirculated. As is standard with US Mint gold numismatic coins, these prices are subject to change based on market conditions. END_OF_DOCUMENT_TOKEN_TO_BE_REPLACED 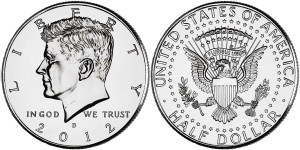 In keeping with other recent US Mint activity, the pricing for most of these annual products has declined from past years. This will be welcome news for those collectors interested in adding one of the affected products to their collection.

END_OF_DOCUMENT_TOKEN_TO_BE_REPLACED 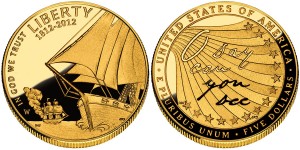 It has been a busy week for the United States Mint when it comes to its precious metal coins. First, commemorative and numismatic gold coins have been re-priced to lower levels. Second, numismatic silver coins previously suspended have been made available again. END_OF_DOCUMENT_TOKEN_TO_BE_REPLACED 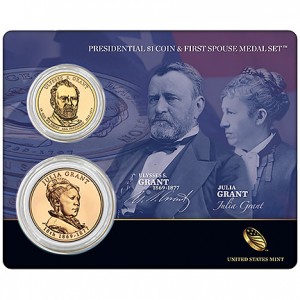 Each Grant $1 Coin and Medal Set will sell for $14.95, plus the US Mint's standard shipping and handling charge of $4.95 per order. Both the coin and medal are encased in a durable plastic card showcasing a colorful depiction of the former President of the United States and his wife. END_OF_DOCUMENT_TOKEN_TO_BE_REPLACED 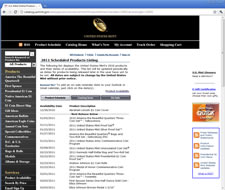 Summer tends to be a slow time for coin collectors and the pending 2011 US Mint Product Schedule seems to reflect that situation. However, despite relatively few releases occurring within the next couple of months, the remainder of 2011 will still offer many new and unique products from the United States Mint. 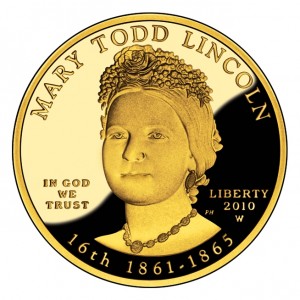 This is according to a recent release from the US Mint.  The coins will go on sale beginning at Noon, Eastern Time on that day and are available in both proof and uncirculated condition.

Each coin is struck from one half ounce of 24-karat gold. Pricing will be set for the coins by the US Mint before their release.  Since they are struck from gold, the Mint will use its precious metal coin pricing matrix to tie the price of the coins to the average of the previous week's London Spot for the precious metal.

These coins mark the last of the First Spouse series to be issued in 2010.  The series debuted in 2007 as a companion to the circulating Presidential $1 Coin series. The Spouse coins honor the spouses of the former Presidents of the United States and are released on a schedule similar to the Presidential Coin for which they are associated with. END_OF_DOCUMENT_TOKEN_TO_BE_REPLACED

Two themes dominate the US Mint's Product Schedule for September 2010, James Buchanan and the Grand Canyon. Together, the two encompass all of the products scheduled to be released during the month.

The James Buchanan products tend to deal mostly with the related First Spouse coins. Typically, this series honors the spouses of the former Presidents of the United States. However, as Buchanan (the 15th President) never married, the Spouse strikes contain his image on the reverse instead and are known as the Buchanan's Liberty Gold Coins. The name is derived from the fact that each contains an image of Liberty on their obverse.

The Buchanan Presidential Dollar honoring him was released back on August 19th, but the First Spouse Coins were only issued on September 2, 2010. Each of the Spouse Coins are struck from 1/2 ounce of 24-karat gold. They are available in either proof or uncirculated condition and currently are on sale for $779 for the proof and $766 for the uncirculated. This price may be adjusted weekly as the Mint links the precious metal coins to the average spot price of gold the previous week. END_OF_DOCUMENT_TOKEN_TO_BE_REPLACED 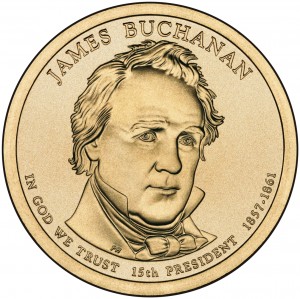 Featured on the obverse (heads side) of the Buchanan $1 Coin is a portrait of the former President.  It was designed by United States Mint Sculptor / Engraver Phebe Hemphill.  The reverse (tails side) of the strike contains the standard design found on the reverse of all of the Presidential $1 coins - the Statue of Liberty.  It was the work of United States Mint Sculptor / Engraver Don Everhart. END_OF_DOCUMENT_TOKEN_TO_BE_REPLACED