This set is always popular with collectors and comes a month after the Mint released the even more popular standard 2010 Proof Set. Both sets offer special proof versions of the fourteen circulating coins of the United States.  However, making the Silver Proof Set unique is the fact that half of the coins included are struck from 90% silver.

Included in the set are the following coins: 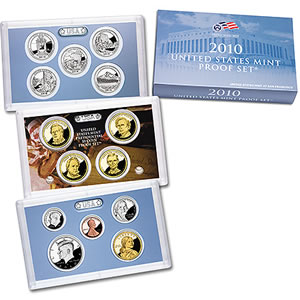 This set includes a total of fourteen coins representing the circulating coinage from the US Mint for the year, but these coins are struck to proof quality at the mint's facility in San Francisco.  As such, each coin carries the appropriate 'S' mintmark.

Proof Sets have proven to be extremely popular with collectors in the past.  Typically, more of these sets are sold each year by the Mint than any other set offered. According to unaudited figures from the Mint for last year, 1,477,967 of the 2009 version of the set were ordered.

While that number is impressive, it is nothing compared to the number of sets ordered in some of the previous years.  Going back as recently as 2006, over 2 million of that year's dated sets were ordered.  In 2000, an amazing 3,082,572 sets were sold by the Mint.

Still, these sets are sure to be a big hit with collectors.  Included inside is a total of fourteen coins, all struck to proof quality so that they feature mirror-like backgrounds and enhanced detail. END_OF_DOCUMENT_TOKEN_TO_BE_REPLACED 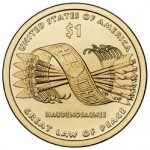 For those interested in the 2010 Native American $1 Coins, but not in the 250-coin boxes released earlier this month, a new option is now available from the United States Mint. Just released on Friday, January 22 with initial ship dates of Tuesday, January 26, the Mint has 25-coin rolls available for purchase.

Wrapped in special yellow and black paper, each roll indicates the year of minting (2010), the contents (Native American $1), the face value of all of the contents ($25) and the Mint facility that struck them (P for Philadelphia or D for Denver).  Each roll contains 25 circulation quality strikes of the 2010 Native American design, but of course as they come directly from the Mint, they have never been in circulation making them ideal for collectors. END_OF_DOCUMENT_TOKEN_TO_BE_REPLACED

The US Mint has released its first offering of the year with the 2010 Native American $1 Coin.

These circulating quality issues first appeared in 2000 as the Sacagawea Dollar, so named because the famous Native American heroine is featured on the obverse with a flying eagle on the reverse.

The line-up changed slightly last year when Congress mandated a new reverse image annually that celebrates 'the important contributions made by Indian tribes and individual Native Americans to the development of the United States and the history of the United States." END_OF_DOCUMENT_TOKEN_TO_BE_REPLACED