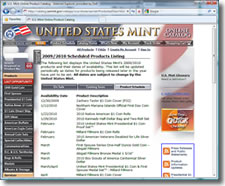 The U.S. Mint late last week updated its schedule and has given exact release dates for product launches in April and in May.

When gazing upon the changes, collectors will immediately notice the addition of 2010 Lincoln cent rolls, which go on sale today at noon Eastern Time.

Presidential $1 coin products take two lines in the updated schedule. The uncirculated set will get the most attention of the two, as the annual offering is fairly popular. The 2009 set had sales of just over 105,000.

And for the first time ever, America the Beautiful Quarters products appear with specific release dates. The new 11-year program begins with five quarter-dollars in 2010. They celebrate a national site and four national parks, with the first one ever recognized by the U.S. government being Hot Springs National Park in Arkansas.

The Hot Springs Park Quarter will likely be one of the most watched releases of the year simply because it is the very first one in the America the Beautiful Quarters Program. Fifty-five more will come later at a rate of five per year, ending with the final coin release in 2021.