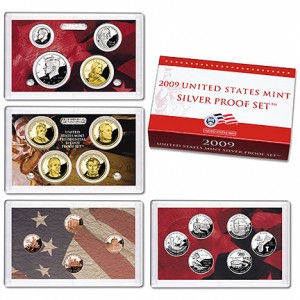 The United States Mint 2009 Silver Proof Set™ has launched, released by the Mint on Friday, July 17. The set contains collector versions of each circulating coin for 2009 at an issue price of $52.95.

Like the annual 2009 Proof Set released in June, each coin is struck in proof condition, which the Mint describes as "extraordinarily brilliant, with sharp relief and a mirror-like background."

Additionally, the bicentennial 2009 Lincoln pennies are composed of the same metal of the original issued 1909 penny -- 5% copper, 3% zinc and 2% tin.

The silver version is unique in that the dime, half-dollar, and six quarters are minted in 90 percent silver.

For more information on the coins included in the set, visit the World Mint Coins page 2009 US Coins. Another perspective of the coins may be read at CoinNews via 2009 Silver Proof Set.

Annual proof sets from the Mint are exceedingly popular with collectors. The 2009 silver sets exploded , with 271,237 sold within the first three days. As another example, more than 774,000 of the 14-coin 2008 Silver Proof Sets were sold by the Mint for $44.95. Current eBay prices have increased since the coins went off sale, as the samplings here show.

One thought on “US 2009 Silver Proof Set Available”