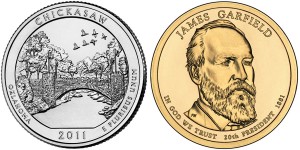 In a week filled with more product activity than normal, the US Mint will both add five new products to its line-up as well as remove five. The affected products include strikes created as part of the America the Beautiful Quarters® Program as well as some minted as part of the Presidential $1 Coin series.

The newest releases will actually replace the outgoing products on the Mint's shelves as part of their associated series. As has been Mint policy, as a new strike in a series is issued, the oldest currently available in that program is removed from availability.

Representing the last 2011 strike of the America the Beautiful Quarters Program, the Chickasaw Quarter will be issued by the US Mint beginning on Monday, November 14, 2011. This coin honors Chickasaw National Recreation Area found in the state of Oklahoma.

Shown on the reverse of the coin is a design emblematic of the location. The design depicts the Lincoln Bridge and surrounding landscape of the recreation area. It was completed by Donna Weaver and sculpted by Jim Licaretz.

As part of this release, the US Mint will make three new products available. This includes 100-coin bags of the new strikes as well as two-roll sets.

As these Chickasaw Quarters make their debut, the associated Mount Hood Quarter bags and rolls will no longer be available directly from the Mint.

Shown on the obverse of the strike is a portrait of James Garfield as completed by United States Mint Sculptor / Engraver Phebe Hemphill. Garfield was the 20th US President and, as such, his strike represents the twentieth release overall of the associated coin series.  This series debuted in 2007 with a coin honoring George Washington, the first US President.

Buyers will have the choice of one 25-coin roll containing circulation quality strikes of the Garfield Presidential $1 Coins struck in Philadelphia or one roll containing strikes from Denver. Each will be sold for $39.95, plus shipping and handling.