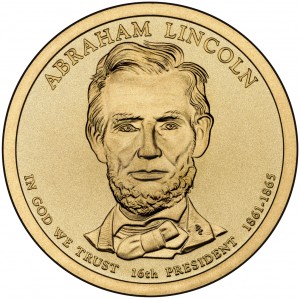 The Lincoln coins mark the final of four Presidential Dollar Coins that were scheduled to be released in 2010.  Strikes honoring Millard Fillmore, Franklin Pierce and James Buchanan have already been issued.  All of them are part of the Presidential Dollar Coin series which debuted in 2010 and features four annual coins honoring former Presidents of the United States released in the order upon which the individual served.

Each Lincoln Presidential Coin obverse showcases a portrait of the 16th President on its obverse.  The portrait was designed by Don Everhart.  Also shown are the inscriptions ABRAHAM LINCOLN, IN GOD WE TRUST, 16TH PRESIDENT and 1861-1865.  The reverse was also designed by Everhart and shows an image of the Statue of Liberty.  That same design is found on the reverse of all of the Presidential Dollar coins and contains the inscriptions $1 and UNITED STATES OF AMERICA.  An edge inscription contains E PLURIBUS UNUM and the date of the coin, 2010.

These strikes mark the final of seven released over the last two years that have featured Lincoln as their subject.  The coins started appearing in 2009 to celebrate the bicentennial of his birth.  Most notable among them was the 2009 Abraham Lincoln Bicentennial Silver Dollar that sold out in less than seven weeks from the US Mint.  50,000 of the proof Silver Dollars were also included in a special Lincoln Coin and Chronicles Set that was issued by the Mint later in the year and sold out in less than two days!

Also, four new cent coins were released by the Mint in 2009 that depicted different stages in the life of Lincoln and were the first change in the design of the cent coin to occur in fifty years.  The first issued was the Birthplace Cent and showed a log cabin on its reverse typical of the style in which Lincoln may have been born in near Hodgenville, Kentucky.

The second new cent issued was the Formative Years Cent and showed a young Lincoln reading a book while taking a break from rail splitting.  Lincoln split rails as he was growing up near present day Lincoln City, Indiana.  The third release showed an adult Lincoln in front of the Old State Capitol Building in Springfield, Illinois where he served in the Illinois General Assembly and also where he practiced law.

Shown on the final new cent coin of 2009 was an unfinished US Capitol Building Dome which is how it would have appeared during Lincoln's Presidency.  Finally, the 2010 Lincoln Cent was issued earlier this year and contains a design of a Union Shield on its reverse indicative of Lincoln's preservation of the Union during the American Civil War.