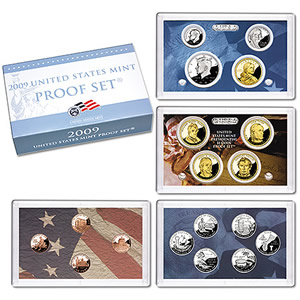 The price is the most expensive ever for a new issue, but included is more coins than ever -- compared to the 2008 proof set, three more Lincoln cents and one additional quarter.

The always popular collector's set contains uniquely struck 2009 coins that bear the "S" mint mark denoting they were struck at the US Mint in San Francisco.

As described exactly by the Mint, "United States Mint Proof Set contains coins that are manufactured using specially prepared, highly polished dies. The coins are extraordinarily brilliant, with sharp relief and a mirror-like background. A frosted, sculpted foreground gives these coins a special cameo effect. The coins are sealed in four protective lenses to showcase and maintain their exceptional finish."

Special to the set are pennies from the 2009 bicentennial Lincoln coins, which celebrate the 200th anniversary of Abraham Lincoln's birth. Unlike the circulating varieties however, each penny is struck from the same alloy (95% copper, 3% zinc and 2% tin) as the original 1909 Lincoln penny.

A listing of each proof coin within the set follows, to include World Mint Coin links with more information:

For another perspective, also read the CoinNews 2009 proof set article.