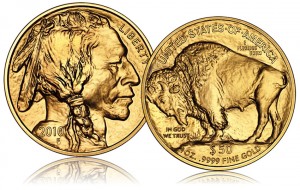 Although it should be noted that this year's issue was available for five months while the 2009s were on sale for less than two months.

"The United States Mint has depleted its inventory of 2010 American Buffalo One Ounce Gold Bullion Coins," the U.S. Mint said in a memorandum sent to its buyers. "No additional inventory will be made available."

The Mint allocated nearly the same amount of the 24 karat bullion coins this year as last, given the yearly totals are only different by a margin of 9,000. The 2010 American Buffalo Gold went on sale April 29, 2010. The Mint's inventory was depleted at 209,000, which will be the ending mintage. By comparison the 2009 Gold Buffalo ended with sales of 200,000 between their October 15 release to when sales were halted on December 4, 2009, due to an inventory depletion.

In terms of annual totals, 2006 remains the winner at 323,000. The year was important to both investors and collectors as it was when the .9999 fine gold coin debuted. For a perspective of how they have performed over the years, review the following table:

Sales of the coins have increased in the last few weeks, helped by all-time high gold prices. The 2010 numismatic proof version is still available, and is currently priced at $1,560 -- prices can change weekly depending on how much gold costs. The major difference between the two is that the proof has a sharper, brilliant finish. As such, the Mint charges a larger premium and also sales them directly to anyone interested, instead of using its network of authorized dealers as it does for all its bullion products.

Information for the 2011-dated bullion coins will be forthcoming. The Mint said it is still finalizing plans for their release.