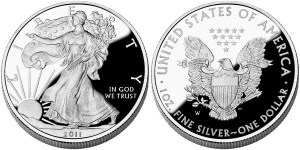 While the United States Mint has yet to offer a complete Product Schedule for 2012 letting the public know when to expect certain products, it has released a list of issue prices for some of those products. Collectors will be happy to learn that many of those 2012 issue prices are lower than their 2011 versions were sold for.

Among the prices announced by the Mint, the 2012 Proof Silver Eagle will see a 9.5% decrease from the highest price point the 2011 Eagle sold at. Other affected products include the United States Mint Uncirculated Coin Set®, several America the Beautiful Quarters® products and some Presidential $1 Coin products.

"We hope these prices will allow us to attract more Americans to coin collecting, while increasing collecting opportunities for our current customer base," said United States Mint Deputy Director Richard A. Peterson.

According to the press release announcing the price drops, the United States Mint Uncirculated Coin Set® will see a decrease of $4. It will be offered for $27.95 whereas the 2011 version sold for $31.95.

Presidential $1 Coins products will also see significant price reductions which is good news for many as they will no longer be struck for general circulation and thus not available in local banks. The Presidential and Native American $1 Coin Rolls were sold last year by the Mint for $39.95. This year the new price will be $32.95.

As with all US Mint products, these prices are subject to change.