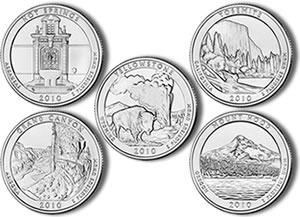 Ending an on again, off again release, the United States Mint started accepting orders for 2010 America the Beautiful Silver Bullion Coins® finally on Friday, December 10, 2010 from its network of authorized purchasers.

The release was originally scheduled for Monday, December 6th, but the Mint postponed it owing to concerns by the public as to the limited mintage and the higher than expected premiums being charged for them in advance of their release.  Given such a limited window to produce the strikes, and further hindered by production difficulties on them, the Mint indicated that the mintage on the 2010 strikes of the program would only be 33,000 per coin.

That relatively small mintage concerned collectors even though the main purpose of the bullion strikes is for investors. However, investors interested in the five ounces of .999 fine silver in each strike would more than likely not be comfortable with paying the premiums first indicated on the coins.  Even collectors balked at the more than $120 per coin premium some dealers had been seeking.

So, on the day of the proposed release, the Mint released a memo to its network of authorized purchasers indicating the issue would be delayed:

The United States Mint issued a press release on December 1, 2010, announcing the December 6, 2010, availability of the 2010 America the Beautiful Ounce Silver Bullion Coins through the established network of Authorized Purchasers who, in turn, would make them available on the secondary market. Due to the limited availability of the 2010 America the Beautiful Silver Bullion Coin coins, public anticipation has been extremely strong. Since the press release was issued, the United States Mint has received numerous calls and inquiries from the public regarding premiums being charged for these coins. As a result, we are delaying the launch of this program. No America the Beautiful Ounce Silver Bullion Coins orders will be confirmed today.

The first condition required the authorized purchasers to sell all of the coins they received insuring the public has access to all of the strikes.  For the second condition, the Mint placed a premium cap of 10% on each coin, over and above their base cost for each strike.  They may add a reasonable handling and shipping fee to each order, but no other fees or charges that would raise the cost of a coin above the previously mentioned 10% cap.

The third condition requires the network to institute a household order limit of one coin per design to ensure the broadest availability to the public. Finally, the Mint demanded that the authorized purchasers not sell any of their America the Beautiful Silver Bullion Coins to its officers or employees to insure that everyone has the same change at obtaining the strikes.

Currently, there are only eleven authorized purchasers participating in the US Mint's silver bullion program world-wide.  Unfortunately, most do not sell the coins directly to the public, but instead sell to other dealers.  Those that do not have a direct relationship with the public will likely find themselves unable to sell the coins at all as they would have no method of complying with the requirement of only selling one per household.

With such intense interest in the bullion strikes, it almost insures that collectors will clamor for the America the Beautiful Uncirculated Silver Coins when they are released to the public early next year.  Only 27,000 of each of the first five designs in the numismatic program will be available.