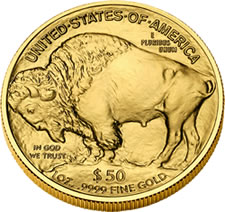 2009 American Buffalo Gold Bullion Coin sales have ended, the US Mint announced on Friday. While the collector or numismatic proof versions are still available -- only the Mint knows for how long -- the inventory of bullion coins is gone, and no more will be produced this year.

"The United States Mint has depleted its inventory of 2009 American Buffalo One Ounce Gold Bullion Coins," said U.S. Mint Director of Public Affairs Tom Jurkowsky to authorized purchasers. "No additional inventory will be made available. As additional information becomes available regarding 2010-dated American Buffalo One Once Gold Bullion Coins, you will be notified."

Unlike coins struck specifically for coin collectors, the US Mint does not sell bullion coins to the public. They are instead offered to Authorized Purchasers who then resell to coin dealers, precious metal providers, and/or directly to the public. (See information on the collector minted 2009 Gold Buffalo Proof Coin.)

The American Buffalo Gold Coins have the distinction of being the first .9999 fine 24-karat gold coins ever struck by the US Mint, and were first released in 2006.

Both the obverse and reverse of the Buffalo are the same basic design that first appeared on the 1913 circulating nickel, commonly known by most as either the "Indian Head Nickel" or the "Buffalo Nickel."

The obverse has a portrait of a Native American, said to be a composite of three Indian chiefs. Many have claimed to be one of those three models, but only two were ever verified by the artist James Earle Fraser: Cheyenne Chief Two Moons and Lakota Sioux Chief Iron Tail.

The reverse contains an image of an American buffalo, also known as a bison. It is believed by many to be modeled after a buffalo named "Black Diamond" who lived in the New York City Zoo.

For more information on the bullion coin, click on the image above.