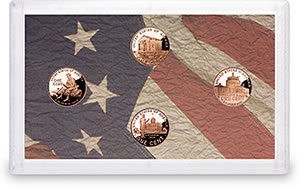 The mind can become quite cloudy when thinking about all the available 2009 Lincoln cent products. It's not so difficult to grasp the pennies themselves.

Four will circulate in every day change, with each celebrating the bicentennial of President Abraham Lincoln's birth and designed after a specific aspect of his life:

Three have already been issued, with the final Presidency penny scheduled to launch sometime in November -- likely the 12th.

What many don't realize, however, is that there are non circulation, collector Lincoln proof cents being sold right now by the United States Mint, and in several different types of proof sets -- two have been available for sometime, one set was just recently launched and another is scheduled for release in October.

Further, 2009 Lincoln proof pennies are uniquely struck, with each cent 95% copper, and 5% tin and zinc -- the same composition as the original 1909 penny.

If any year is a good time to purchase a proof set, 2009 is probably it just for the unique Lincoln cent designs and special composition.

As also laid out on sister site CoinNews via the article Lincoln Proof Cent Products, here is a listing of available and the upcoming sets:

One thought on “US Mint Proof Sets with 2009 Lincoln Cents”