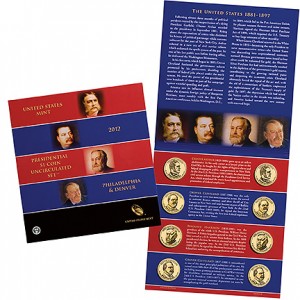 The United States Mint today, May 1, 2012, released the newest annual coin set in its portfolio. The 2012 Presidential $1 Coin Uncirculated Set™ is available now directly from the US Mint for $16.95, plus the Mint's standard shipping and handling charge of $4.95 per order.

However, in December of 2011, circulating production of the Presidential $1 Coin series was suspended. The order came at the discretion of the Secretary of the Treasury as part of a broader Campaign to Cut Government Waste established by President Barack Obama.

The series was seen as wasteful for circulation because stockpiles of them were growing in Federal Reserve vaults. As a result of the cancellation, coins of the series are now only struck for numismatic purposes.

Each of the eight coins of the set are each presented in separate rotatable blisters affixed to an illustrated folder. The folder contains information on the series as well as the four Presidents featured in the 2012 releases along with portraits of those Presidents.

Coins of the series are also issued in other US Mint products. One example is the Chester Arthur Boxes and Rolls released on April 5, 2012. They also appear as part of several other annual coin sets of the US Mint such as the Presidential $1 Coin Proof Sets and the annual United States Mint Proof Sets.

Orders for the new 2012 Presidential $1 Coin Uncirculated Set™ may be placed directly with the United States Mint via their toll-free number of -800-USA-MINT (872-6468) or via the Mint's website of www.usmint.gov. A mintage limit of 100,000 is in place for the release.