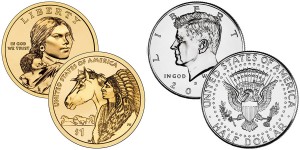 Demand for both coins in circulation is negligible, thus the US Mint only offers them for sale directly to the public to fulfill collector demand. More information on the newly available products is offered below:

Obverse designs for all Native American Coins continues to depict Sacagawea. The image of the Shoshone woman who accompanied Lewis & Clark on their expedition into the interior of the United States was originally completed by Glenna Goodacre.

This release comes just a few weeks after the United States Mint offered the 2012 Native American $1 Coin Boxes and Rolls for sale. Those boxes and rolls are still currently available and are now joined by the 100-coin bags.

Each bag may be purchased directly from the US Mint for $111.95, plus the US Mint's standard shipping and handling charge of $4.95 per order.

2012 Kennedy Half Dollar Bags and Rolls

Shown on the obverse of the Kennedy Half Dollar is a portrait of the 35th President of the United States, John F. Kennedy. The portrait was originally designed by United States Mint Sculptor-Engraver Gilroy Roberts and first appeared on the half dollar coin in 1964, shortly after the assassination of Kennedy.

The reverse was designed by United States Mint Scupltor-Engraver Frank Gasparro and also first appeared on the half dollar coin in 1964. It depicts a Presidential Seal motif.

The 2012 Kennedy Half Dollar 200-Coin Bags contain 100 half dollars struck at the Denver facility and 100 struck at the Philadelphia facility.  Each bag is priced at $139.95.

Once available, purchases for all of these products may be made by calling the United States Mint at 1-800-USA-MINT (872-6468).  Hearing- and speech-impaired customers may order by calling 1-888-321-MINT (6468). Orders may also be placed via the Mint's online store at catalog.usmint.gov.