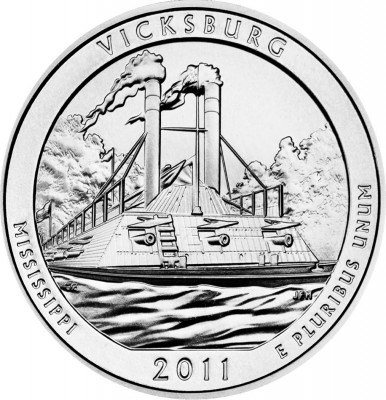 The United States Mint indicated today that the 2011 Vicksburg National Military Park Silver Bullion Coins will be made available for ordering to its network of authorized purchasers beginning on Monday, June 20, 2011.

This will mark the fourth release of the 2011 America the Beautiful Five Ounce Silver Bullion Coin™ Program and the ninth in the series overall. Coins in the series each feature a reverse design honoring a specific site of national interest with this coin's reverse depicting a design of Vicksburg National Military Park representing the state of Mississippi.

Each is struck from five ounces of .999 fine silver to a diameter of three inches. The US Mint produces the coins as an investment option for individuals looking to add small amounts of silver to their portfolios, however, collectors have also shown extreme interest in the strikes for numismatic purposes.

By the end of both series, each state as well as the District of Columbia and the five US territories will have been honored by one release per program. The release order for the strikes is dictated by the order in which the selected sites came under the direct control of the federal government.

Shown on the reverse of the Vicksburg Coin is a design depicting the Civil War era gunboat USS Cairo as it would have appeared during the war steaming on the Yazoo River as designed by Thomas Cleveland and sculpted by Joseph Menna. The Cairo was salvaged and partially restored and is now on display at Vicksburg National Military Park.

As previously mentioned, the release of the Vicksburg Silver Bullion Coin marks the fourth  strike to appear this year in the series and follows coins honoring Gettysburg National Military Park, Glacier National Park and Olympic National Park. One more is scheduled to be issued this year in the program and will honor Chickasaw National Recreation Area.

Like the previous three strikes, the United States Mint indicates a minimum mintage of 126,700 for the Vicksburg Coins with additional coins being struck if needed and resources available.  This is in contrast to last year's debut strikes in which the Mint was only able to produce 33,000 per design.

Once the Mint's authorized purchasers have placed their initial orders for the Vicksburg Silver Bullion Coins on June 20th, the Mint will begin the process of distributing the strikes to those purchasers. They, in turn, will then begin offering them for sale to the public either directly or through local precious metal and coin dealers that have purchased the strikes from them in order to resell to the public.